A Brief History of Westminster 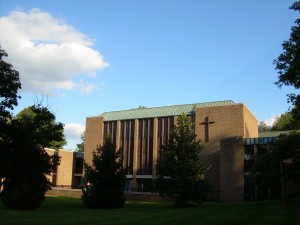 On the last Wednesday in September of 1964, a group of interested residents of West Knoxville met to discuss the possibility of establishing a new Presbyterian church in the Lyons Bend area. They chose the name Westminster Presbyterian Church, and the new group began meeting on November 14, 1964 at Rocky Hill School.  On Sunday, December 20, at the morning Worship Service, a special offering was received to purchase our church lot (5.5 acres at that time).  With Ruling Elders, Board of Deacons, and Trustees elected, the new church was officially organized on February 7, 1965. Westminster closed its charter membership roll on Easter Sunday with 98 names, the largest such charter membership in the history of the Presbytery of East Tennessee.

By the end of May in 1965, the congregation elected the Building Planning Council. Six months later this committee reported that over half of their goal of $250,000 had been secured in pledges from the congregation (21 families) and a grant from the Home Missions Committee. In the fall of that year, mission and outreach activities were all established. In October, 400 friends took a train trip to Hot Springs, NC for a retreat, inviting guests from Bachman Home in Cleveland.

Two women’s circles were formed. In addition to organizing a Birthday Offering to Korean Christian students, they held family night suppers, get-togethers for prospective new members, and hosted the annual Fourth of July picnic. They also volunteered their time to make choir robes for the rapidly-expanding choir.

The Women of Westminster teamed up with other women’s groups in the area to furnish the basement of Bachman Home, help with overseas relief, and other national and international missions. 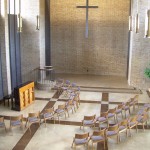 The following February the plans for the building were unveiled by the architect, Bruce McCarty. The ground-breaking ceremony was held three months later, on May 15, 1966, on the property.

On Christmas Eve of 1966, Westminster Presbyterian Church opened its doors for the first service in the newly built chapel. In the short period of only sixteen months, this church had been conceived, nurtured, and born into a reality. The original building held a sanctuary, classrooms, and offices.

Fellowship activities expanded during the late sixties, with basketball, softball, and volleyball leagues. Workdays to maintain the church grounds were held once or twice a year. 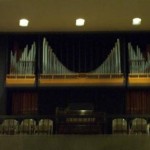 On Easter Sunday of 1969, the Catharine Walters Marsh organ was dedicated and played for the first time. Given in loving memory of their daughter by Mr. and Mrs. Frank Marsh, this beautiful instrument is still giving joy in the loft of the original sanctuary.

From its beginnings, Westminster Presbyterian had an active education program, led by dedicated parents. The program for children at Westminster grew rapidly. Elementary school children met each Wednesday afternoon for fellowship, study, music, and dinner. There were musicals and plays
rehearsed during that time and presented to the congregation. Parents brought meals from homes in coolers, since there was not a kitchen big enough to cook meals for a large group of children. Many children attended first because of the midweek programs offered for them, then their families began to join the congregation, as well. 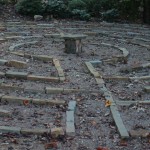 The grounds were expanded in 1971 with the donation of the strip of land which now is home to our prayer path, labyrinth, and amphitheater. What began as a May Day Ecology Fair that year has grown into Westminster’s deep concern and care for God’s creation.

The congregation’s rapid growth in the 1970’s led to a need for more administrative and program staff and more space. The McKinnon Room and kitchen wing were added in 1978. 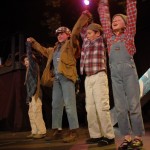 In 1988 Barbara Schilling, wife of pastor Fritz Schilling, began a children’s drama program that has grown into a thriving ministry for children and adults alike. Westminster Players subsequently began in 1996. The children present a play at Christmas each year, and adult plays are presented a few times a year.

The current sanctuary, built when the congregation outgrew its worship space, was dedicated in May of 1996. The architect was again Bruce McCarty. Like the chapel, the sanctuary is rectangular in shape, with a high ceiling and high clerestory windows.

The magnificent organ in the sanctuary, Richards, Fowkes and Company’s Opus 7, was installed and voiced beginning in 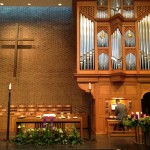 September of 1998 and was dedicated on May 2, 1999. The sound of the 33-rank instrument (25 stops on two manuals and pedal) is inviting and enveloping, inspiring us all to do our best hymn singing as we worship the Lord.

In the summer of 2004, a new wing connecting the sanctuary with the original building was dedicated. It contains the Schilling Gallery (named for our Minister Emeritus, Fritz Schilling, who retired in 2004) and offices for the staff. This building phase also included a new kitchen, the front plaza and beautiful waterfall, and the columbarium with a perennial garden. The architect for the new wing was, again, Bruce McCarty.

Peter J. Van Eenam, Organist and Choirmaster (November 1981 to the present) is the third musician in that position.

Westminster Presbyterian Church continues to grow and thrive as we celebrate our fiftieth anniversary of being a community “where faith and life connect.”