This year Westminster Church begins its next 50 years of community, ministry, and worshiping together. The music program will continue to be actively involved in every aspect of the church’s life, revisiting great music of past years as well as introducing new music. I look forward to the many opportunities for musical growth and sharing in worship the music program affords the congregation, and I am eager to begin this year’s journey. My thanks always to the vast community of devoted musicians present and past. I want to invite everyone in the Westminster community to become involved. The choirs cannot flourish and effectively serve without you. As the church receives its life from the diverse gifts of its members, so too does each choir. We are a connectional church and we build up our church’s body through the wonderful bonding and interaction that take place in small groups such as choirs. The music program begins its regular weekly rehearsal schedule soon. Our program is designed to cultivate the musical contributions to worship of the entire congregation and we have a seat waiting for you! Westminster’s Music Program

Richards, Fowkes Opus 7 Organ
When Westminster Presbyterian Church commissioned Richards, Fowkes & Company in 1994 to build their Opus 7, what was envisioned was an instrument that would benefit not only the worship of the congregation but also music making in the community and entire region. At the same time, Westminster was building a new sanctuary, incorporating into the design an ambiance and acoustic that would lend beauty and support to worship and musical offerings. The church was fortunate to have architect, acoustician, and organ builder in collaboration as this vision was brought into being.

Richards, Fowkes & Company’s Opus 7 was installed and voiced beginning in September 1998 and was dedicated the following May with a recital given by Robert Clark, who served as the consultant. The organ is 33 ranks, with 25 stops on two manuals and pedal.

Richards, Fowkes & Company’s Opus 7 is strongly influenced by the work of Arp Schnitger and the North German/Dutch tradition and yet reflects an eclecticism that successfully supports the wide range of musical demands placed on it by the many periods of church music included in worship and concerts at Westminster. Its sensitive mechanical action provides the player with an extraordinary intimacy of touch and infinite degree of control over the manner in which the air enters each pipe. The approach to voicing produces a warm, vocal, well-blended sound with color and interest; moreover, because the stops can be combined successfully in both conventional and uncommon ways, the instrument is very versatile and offers the player great artistic freedom. The sound is inviting and enveloping, intended to inspire the singing of hymns and other service music, accompany the choirs, and convincingly play most of the great organ literature.

Westminster is now sharing this wonderful new instrument and setting with the community and region in an annual series of organ recitals, Musica Organi. Many of the world’s premier organists are being brought to our area as part of Westminster’s musical outreach.

Schantz Organ in the Chapel/Fellowship Hall 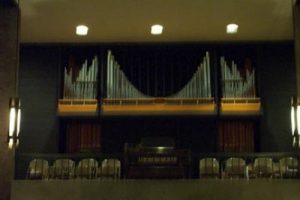 Westminster has a lovely organ in the back gallery of the Chapel/Fellowship Hall (the original sanctuary of the church). Marty and Frank Marsh gave it to Westminster in 1969 in loving memory of their daughter, Cathy Marsh, who was killed in an automobile accident in 1968. The organ was dedicated on Easter Sunday of 1969. Alfred E.Lunsford of the Schantz Organ Company built the instrument, modeled after North German and Dutch organs of the Baroque period, combining a Schantz console and German pipework. Its 14 ranks of pipes appear as 12 stops on two manuals and pedal.
Nursery Policy Statement
Meet the Teachers
Rob McKeehan